Are you looking for:

HONG KONG –Amid the anxiety and disruption caused by the COVID-19 pandemic, insurance customers across Asia are starting to adopt healthier lifestyle habits in terms of physical health and mental well-being, and increasingly recognise the convenience of digital technology in their day-to-day lives, according to a new survey by Manulife.

The Manulife Asia Care Survey of 2,400 insurance owners across eight markets takes a closer look at the pandemic’s long-term impact on local economies, personal wealth and insurance buying habits. The survey, which was conducted in late May, covered Mainland China, Hong Kong, Indonesia, Japan, Malaysia, Philippines, Singapore and Vietnam. All those surveyed were current insurance customers who own Manulife or other insurers’ policies.

Around 50% of policyholders surveyed said that getting more physically healthy was a new habit they have formed since the pandemic, with 41% of them saying they expect to be continuing healthier ways of living in the next 18 months. At the same time, 33% of the Asia respondents also started to monitor their mental health status, with around a quarter (24%) of them saying they intend to incorporate mental wellbeing into their daily lifestyle over the next 18 months.

The emerging pattern is significant because if policyholders can make these changing habits stick or more of them start to adopt these new ways of living, there would be major benefits over the longer term. The survey findings point to fitter, healthier people regionwide in 18 months’ time. That could potentially have profound benefits for local healthcare services and individuals’ quality of life.

“The survey provides a closer understanding of customers’ concerns, priorities and aspirations,” said Anil Wadhwani, President and CEO of Manulife Asia. “Growing our health business is a core element of our strategy to meet customers’ needs, and these findings feed into the design of our products and services, not just at the point of illness, but also during daily life. With behaviour-linked programmes like ManulifeMOVE, we can incentivise and support our customers to take better control of their health and make their lives every day better.”

The concerns expressed by the Manulife Asia Care Survey respondents about the impact of COVID-19 on their local economies correlate with the rate of new cases. In Mainland China and Vietnam, where new cases are relatively low, those surveyed were more upbeat about the pandemic becoming less serious in the next six months, with only 11% and 18% respectively expecting COVID-19 to worsen during that period. In Indonesia and Philippines, where the number of new cases is rising, insurance owners were far less sanguine – 74% and 58% respectively felt COVID-19 would be slightly more or much more serious six months down the road. That contrasts with the average of 41% across all markets.

The respondents’ appetite for a healthier and more active lifestyle is also important given the rising cost of healthcare and the need for local health services to meet increased demand, in many parts, from an aging population. Across Asia, healthcare costs have increased significantly over the past 20 years, rising nearly 500% during that period, according to the World Bank.[1]

In tandem with their increasingly health-conscious behaviour, there was a couple of other standout findings in the survey relating to financial planning. Firstly, the majority of the respondents lack financial preparedness to hunker down for a few more months in the event of another wave of the pandemic. On average, only 46% said they have more than six months savings on hand to survive if they suffered sudden loss of income.

Secondly, the vast majority of the respondents (62%) said they were looking to increase their insurance during the next six to 18 months. Life insurance and products offering protection from critical illness, health concerns and hospitalisation were of particular interest. Concerns about COVID-19 may have contributed to their demand for insurance, but it also points to a better understanding of how insurance can help them if faced with recurring ill health and critical illness, including hospitalisation and the associated financial impact.

In the emerging markets that tend to be under-insured, such as Indonesia, Philippines and Vietnam, interest in buying more insurance was discernibly stronger than elsewhere. Quite possibly, the pandemic has led to a greater awareness of the protection that insurance can offer. Alongside that, insurance is more accessible now as a result of digitisation. 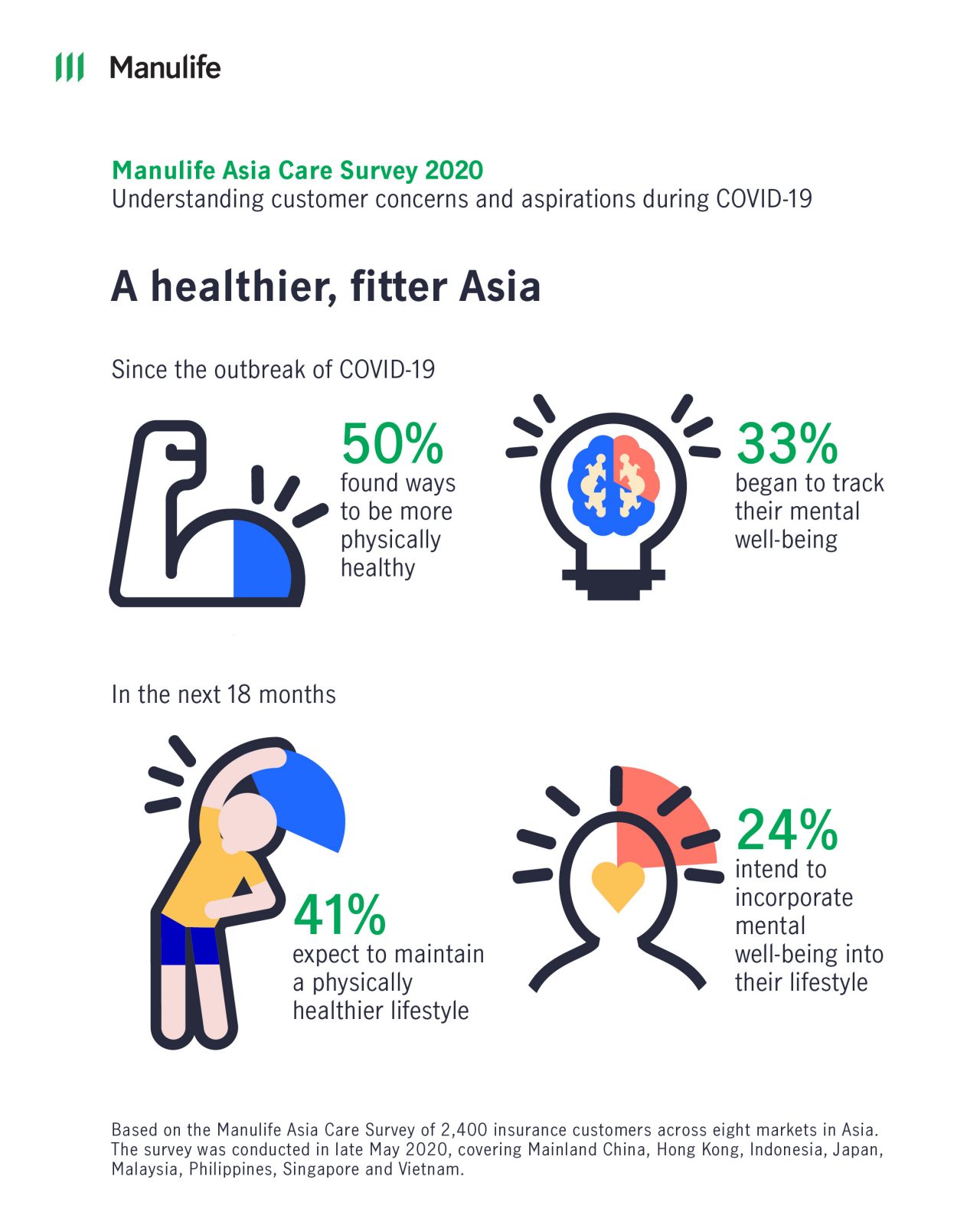 “The fact that insurance customers, with Manulife and others, are looking to increase their insurance protection in the coming months shows that they see the value of the protection and security provided and appreciate easier online access to it,” said Wadhwani. “Digitisation is central to Manulife’s customer-centric strategy so it’s promising to see an increasing appetite among customers across Asia to use digital for their financial planning and insurance purchases.”

Manulife has introduced non-face-to-face capabilities across Asia, allowing agents and customers to meet virtually and close sales digitally. Customers can submit claims electronically and discuss their financial needs with agents through video conferencing and screen sharing via encrypted networks. This can help satisfy the strong demand for insurance products as people are more conscious of their health and protection needs during the pandemic.

According to the survey, the trend towards digital goes beyond financial services. Use of online services (61%), e-commerce tools for shopping and digital platforms (54%), including social media for news (54%) have jumped discernibly. “Digitisation was already well underway across Asia; the pandemic simply accelerated the process,” added Wadhwani. “People have very quickly grown to appreciate the speed and convenience of user-friendly online tools, so it’s up to us as an industry to change the way we do things. That’s why Manulife is focused on ramping up our own digital transformation, using digital to make our business simpler, more agile and above all customer-centric.”

Manulife Financial Corporation is a leading international financial services group that helps people make their decisions easier and lives better. With our global headquarters in Toronto, Canada, we operate as Manulife across our offices in Canada, Asia, and Europe, and primarily as John Hancock in the United States. We provide financial advice, insurance, and wealth and asset management solutions for individuals, groups and institutions. At the end of 2019, we had more than 35,000 employees, over 98,000 agents, and thousands of distribution partners, serving almost 30 million customers. As of March 31, 2020, we had $1.2 trillion (US$0.8 trillion) in assets under management and administration, and in the previous 12 months we made $30.4 billion in payments to our customers. Our principal operations are in Asia, Canada and the United States where we have served customers for more than 155 years. We trade as 'MFC' on the Toronto, New York, and the Philippine stock exchanges and under '945' in Hong Kong.