Are you looking for:

BOSTON – John Hancock and the Boston Athletic Association today announced the return of 2018 Boston Marathon open champions Desiree Linden and Yuki Kawauchi, as well as wheelchair champions Tatyana McFadden and Marcel Hug for the 123rd running of the race on April 15, 2019. The 2019 Boston Marathon marks the 34th year of John Hancock’s landmark sponsorship of the world’s oldest annual marathon.

“At Boston this year, Desiree Linden, Yuki Kawauchi, Tatyana McFadden and Marcel Hug proved freezing rain and driving wind were no match for the opportunity to be crowned Boston Marathon champions,” said John Hancock Chief Marketing Officer Barbara Goose. “Their perseverance and tenacity led the way for thousands of runners to realize their own dreams. We look forward to welcoming back our champions as well as all participants and spectators for another historic race on Patriots’ Day.”

“Last April Des Linden and Yuki Kawauchi, in the most challenging of weather conditions, etched their names in Boston Marathon history with races that served to inspire people around the world,” said Boston Athletic Association CEO Tom Grilk. “In the wheelchair division, Tatyana McFadden and Marcel Hug both returned to their familiar spots on the podium with resounding victories. Along with John Hancock, we are excited to welcome this quartet of champions back to Boston for the 123rd Boston Marathon.” 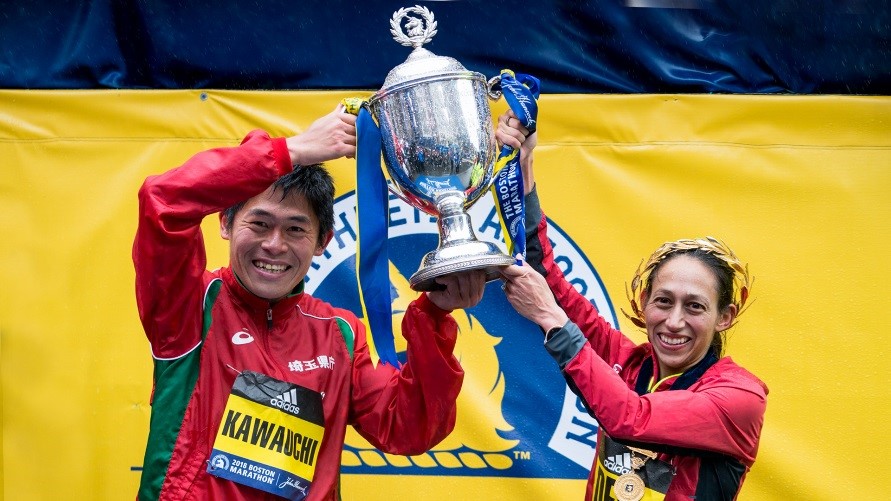 “John Hancock takes so much pride in assembling their elite field. They bring together world class athletes with different racing strengths who can create a compelling story out on the roads,” said Linden. “In 2007, I ran my first Boston Marathon; I absolutely fell in love with the event, the course, the city, all of it. I thought I had every experience imaginable racing in Boston, but in 2019 I’m thrilled and proud to have another first as I’ll start the race as the defending Boston Marathon Champion. My 12 years of history in Boston have nothing on the 123 years of the event, but each year has made me love and appreciate it even more, and I can’t imagine racing anywhere else in April.”

“I am pleased to be able to take part in the Boston Marathon again as the returning champion,” said Kawauchi. “My victory in Boston was a moment in my marathon life that I will never forget. I look forward to meeting all my fellow runners in Boston and running together with them.”

“I love coming to Boston,” said McFadden. “It will always hold a special place in my heart. I love the course and the community support. The course is very technical and the elite women’s division continues to grow and get better every year.”

“It means a lot to me to come back to Boston next year to this prestigious and historic marathon,” said Hug. “The best athletes from all over the world will be at the start line. I am the defending champion there; this makes it even more special.”

Additional elite field announcements will roll out over the next month. For more information about the elite athlete program and sponsorship, please visit www.johnhancock.com/bostonmarathon/sportspartnerships.html

About John Hancock and Manulife

John Hancock is a division of Manulife Financial Corporation, a leading international financial services group that helps people make their decisions easier and lives better. We operate primarily as John Hancock in the United States, and Manulife elsewhere. We provide financial advice, insurance and wealth and asset management solutions for individuals, groups and institutions. Assets under management and administration by Manulife and its subsidiaries were over CAD$1.1 trillion (US$863 billion) as of September 30, 2018. Manulife Financial Corporation trades as MFC on the TSX, NYSE, and PSE, and under 945 on the SEHK. Manulife can be found at manulife.com.

One of the largest life insurers in the United States, John Hancock supports approximately 10 million Americans with a broad range of financial products, including life insurance, annuities, investments, 401(k) plans, and college savings plans. Additional information about John Hancock may be found at johnhancock.com.